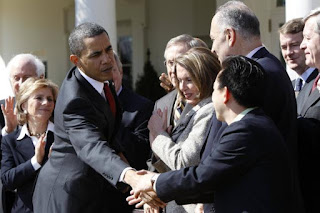 With President Barack Obama’s March 18 signing into law the Hiring Incentives to Restore Employment Act, employers now have two tax incentives to begin hiring previously unemployed workers between now and the end of the year.

The HIRE Act is intended to encourage companies to hire and retain unemployed individuals, by offering employers payroll-tax relief for hiring unemployed workers in 2010, as well as a tax credit for retaining 2010 new hires for at least one year.

With the HIRE Act now law, employers hiring previously unemployed individuals are exempt from paying the employer’s portion of the Old Age, Survivors and Disability Insurance/Social Security tax liability, for wages paid between March 18 and Dec. 31, 2010.

“Basically, the [newly hired] employee still pays the Social Security tax, but the employer does not have to pay the matching tax,” said Mark Betts, payroll director at ASAP Accounting and Payroll Service, Inc., which serves Telluride, Montrose, Durango, and Carbondale. “For instance, for someone who makes $40,000 a year, the employer is paying another $2,500 in taxes above that $40,000.

“This [HIRE Act] provides a savings of that tax for the employer.”

Or think of it this way, Betts said: Employers generally pay 10-15 percent above every dollar employees receive in taxes.” The HIRE Act, he explained, will “drastically reduce that figure, down to 6. 2 percent.”

As with any tax incentives, there are rules and fine print to make sure employers don’t game the system. Qualifications for the instant payroll credit for the employer’s portion of the OASDI/Social include:

• The individual must not have been employed for more than 40 hours during 60-day period ending on the date their new employment begins.

• The qualified individual cannot displace a current employee, unless the first employee was separated from employment voluntarily or for a cause.

• Additionally, employees to the employer or who directly or indiscreetly own more than 50 percent of the business are not eligible.

• Employees whose wages exceed the $106,500 Social Security wage base are not eligible.

A second Hire Act tax incentive for employers offers a retained worker business credit. In this instance, employers hiring new workers who qualify for the instant payroll credit and keeping them on the payroll for at least 52 consecutive weeks may qualify for an additional tax credits, “retained worker credits” that will provide each business a credit for the lesser of $1,000 (or 6.2 percent of wages) paid to the employee during their year-long period of employment.

“For the year 2010, if a business hires 10 qualified workers, it could get a $10,000 tax credit for that year,” if all 10 “remain employed,” Betts said, adding that both the instant- payroll tax credit and the retained-worker business credit are two distinctly different tax credits.

To qualify for the retained worker business credit:

• A qualified retained worker must be paid an amount equal to at least 80 percent of his or her first 26 weeks of wages during the last 26 weeks of the 52 consecutive week qualifying period.

• The new hire must stay on the job for at least the 52 consecutive-week period to entitle his or her employer to the retained worker business credit.

• Credit would be taken on the employer’s 2011 income tax return, because of the 52-week prerequisite.

“With every new tax law, there is always some fine print that needs to be understood,” Betts said, “but basically this is good news. From March 18 until the end of the year, business who hire don’t have to pay Social Security taxes. The main thing is to encourage hiring.”

Betts suggested that employers with questions on the tax incentives contact a tax professional. For updates and further information on the HIRE Act, visit www.buisnessASAP.com.

Nick Giammarino, yes, I actually read your comments, don't be afraid, leave me one.